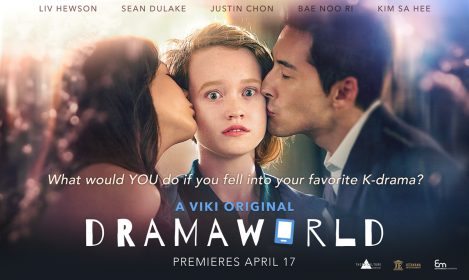 The 10-episode web comedy-drama is set in Los Angeles and South Korea, written in both English and Korean, and aimed at the fast-growing global fan base of Asian dramas.

As such it features “an international cast (Liv Hewson, Sean Dulake and Kim Sa-hee) and crew, a storyline written for an international and increasingly mobile audience, and digital-only distribution deals” as emphasized by Viki’s CEO, Tammy H. Nam.

Coproducer Jetavana Entertainment will shop around the streaming rights to the various Chinese VOD platforms, while an exclusive Korean platform should be announced shortly.

As a reminder, here is DRAMAWORLD’s synopsis:

DRAMAWORLD follows Claire Duncan (played by Australian newcomer Liv Hewson), a cute if slightly nerdy 20-year-old college student who’s obsessed with Korean dramas and remains glued to the TV screen at every opportunity, following her favourite leading man, Joon Park (played by Sean Dulake of Korean dramas “Jejungwon” and “Athena: Goddess of War”). Through a twist of fate and a touch of magic, Claire’s world is turned upside down as she finds herself sucked into her favourite show through her smartphone, transporting her into Dramaworld. Claire will soon find out, with a little help from her new friend Seth (played by Justin Chon of “The Twilight Saga” and “21 & Over”), that even she has a role to play in this world. (Source: Viki)

As we mentioned before, there will be appearances from some of hottest Kpop and Kdrama stars, such as Super Junior’s Choi Si-won (She Was Pretty, nominated at our 2nd Daehan Drama Awards) and Han Ji-min (Padam Padam, Rooftop Prince, Hyde Jekyll and Me).

DRAMAWORLD is directed by Chris Martin, written by Josh Billing and Chris Martin, and produced by Viki, China’s Jetavana Entertainment (The Karate Kid), EnterMedia Contents (US remakes of Good Doctor and My Love from Another Star) and Third Culture Content (an “international production company focused on blending cultures in TV, film and new media” – similar to our project with webseries through Daehan Drama!).