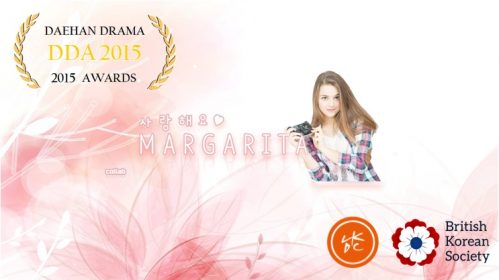 Another exciting update for our upcoming Daehan Drama Awards 2015 just came up. We are very glad to announce that rising YouTube celebrity Margarita Letitchevski has accepted our invitation to be our Master of Ceremony.

For those who don’t know Margarita yet, she is 20-year old Russian/Israeli and has been singing since she is 4 years old. She launched her YouTube channel in 2012 mainly with vocal/dance covers.

She started doing Kpop covers in 2013, and totally by chance won a competition organized by YG Entertainment for her cover of Taeyang’s Eyes, Nose, Lips. She has since started to further expanded her interest and knowledge of Korean culture and language, resulting in her starting a Weekly Korean video series in 2015.

She hosted her first live event at the Korean Cultural Centre UK (KCCUK) on February 26th, K-Tube: A Journey to Korea through YouTube, in relation with her undergraduate studies related to the Creative and Cultural Industries at City University London, which was well attended.

We are very excited to have her with us and hope that many of you will discover her amazing singing skills and that her existing fans will join us for our 2nd Kdrama awards ceremony in the UK.