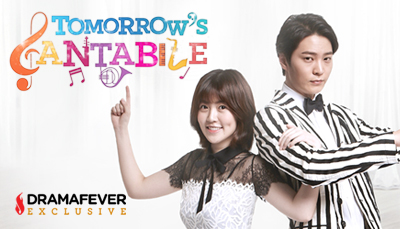 Today, Monday 13 October, DramaFever will premiere its second coproduction project, Tomorrow’s Cantabile, based on the popular Japanese manga, on its VOD service in North America and Latin America.

Its first venture was with Hwa & Dam Pictures for The Heirs, a 20-episode romantic drama series starring Lee Min-ho (Boys Over Flowers, City Hunter) and Park Shin-hye (Flower Boy Next Door, Pinocchio), for Korean broadcast network SBS. The drama was a ratings success for both SBS (16.7% nationwide average) and DramaFever (2 billion views worldwide!). It was critically acclaimed in the U.S. at the DramaFever Awards 2014 which Park Shin-hye attended, but also in the UK as the drama won the Best OST at our Daehan Drama Awards.

This second venture was with Hwa & Dam Pictures again, for KBS2. The drama will premiere on the Korean national broadcast channel on October 13 at 9:55PM and will air every Monday and Tuesday evenings same time. It will then stream on DramaFever within 24 hours.

This past Friday 10 October (same day as our Daehan Drama Awards!), DramaFever celebrated its 5th anniversary. The platform has accumulated 20 million views across 700 titles from 70 broadcasters and production companies from Asia, Europe and Americas.

Considering how successful the Japanese adaptation of Nodame Cantabile was, fans will surely rush to stream the new drama once it is made available online. In any case, it won’t be available in the UK yet, but we will make sure to let you know once it is. In the meantime, you can check the trailer: